With her distinct yet versatile vocals, Hongdae’s favorite indie singer-songwriter Taru washes down all our sorrows and wounds with her latest album, Blind, which just released in November of last year. And just as it was reviewed, Taru has her one unique way of captivating the listeners by constantly changing and reinventing her image as well as the vibe of each of her albums.

Blind is of no excuse as she explores a much darker side within her. Even as one of the old school indie singers, Taru comments that she is not “changing” but is just revealing the different faces that she possesses through what she loves doing the most, music.

Meanwhile, Taru shares with koreanindie her thoughts on the current indie scene as well as her upcoming album releases.

Your most memorable moment on stage?

I don’t think much about past performances. Maybe it is because I let everything go without regret when I’m on stage. For me, I’m always filled with anticipation and excitement for the next performance.

What are your charms? What do listeners find most attractive about your songs?

Other people would point out my unique vocals as my charm.

How do you choose your concepts for albums?

As I go through my day, I write down words that would give me inspiration on a post-it and put it besides my desk. And if there is a good theme, then I would question it as I expand more on the thought.

What inspired you to make a change in your latest album?

It would be more appropriate to say that I was revealing one of the concepts that I already had rather than changing it. Wouldn’t it be uncanny to say that a person possesses only one characteristic?

When was your turning point as an indie singer?

Ever since I started music, it was a turning point and there hasn’t been a moment when I didn’t grow. But if there was a distinct moment that changed me was when I started to do it with faith. If I were to say that I lived imprisoned within my pains, now I take more interest in other’s wounds.

Do you have any thoughts on your next album concept?

Yes. My next album will be much more hopeful and bright. I’m going to restrain some things musically and try to focus more on my distinguishing personality. 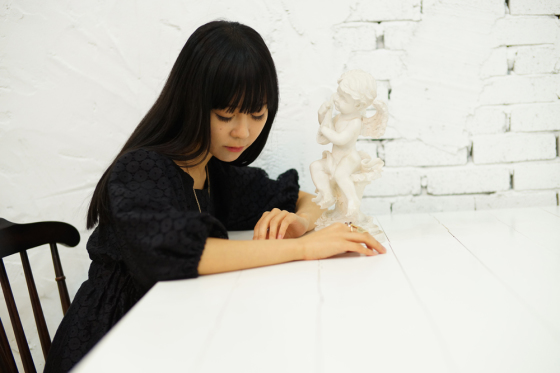 Do you have any plans on working as a group anytime in the future?

Right now, there are some issues with it (working in a group) so as of now, there are no plans. But as time passes, if I was to find someone with similar philosophy, then I am more than willing.

Do you have an ideal partner?

Recently, I think Coffee Boy would be my ideal partner. We are similar mostly in the way we view life as well as philosophy. Also he is able to balance out my distinct vocals.

For now, I want to focus on my own album.

Rookie band that you are currently eyeing?

Oh! I should look around starting tomorrow (none at the moment).

Anything you want to change about your next album? And what did you do differently in this recent album.

I think I will be releasing my next album within this year. I always try to find the new in my albums. I am striving for a diverse album that would be in harmony with the season, filled with songs that would live and breathe within the listeners.

How do you feel about the changes in the indie scene?

In the past, indie was more dictionary-defined as one type of business where it meant ‘independent from the capital.’ But now, it has become a recognized music genre. However, it is also true that as corporate businesses are moving their way into this rather small industry, that there are many companies that are going into bankruptcy and artists dealing with irrational distribution of profit.

The song I would recommend is from my latest album, “I told you.”

Any lasting words for your fans?

Rather than wanting to become a role model or a legend, I want to become a friend to my listeners; a musician who they can cry with and lend a shoulder to my listeners. I wish to make wonderful memories with those who will join me and my loving fans at my performances. Let’s be together for a long time.