The first thing you’ll realize about Dead Buttons is the energy the duo have when they’re performing. If you have a chance to watch the band, you should take it.

Dead Buttons were a band I discovered through bandcamp. As they prepare for the upcoming tour in May, Ji Hyun took some time to introduce the duo.

If you want to see Dead Buttons during their UK tour, here are the dates. 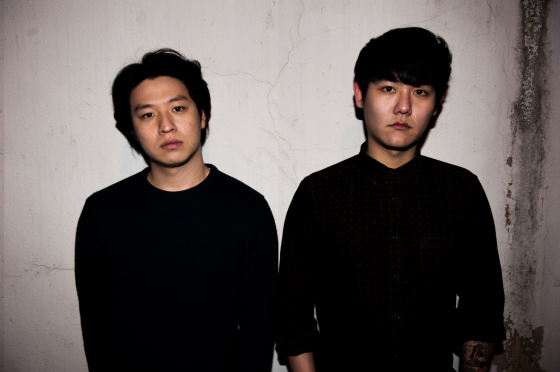 Hi, my name is Ji Hyun. I’m the guitarist and vocalist for the Korean rock ‘n’ roll duo Dead Buttons. Dead Buttons also includes Kang Hee. He plays drums. Our band first formed as a trio, but we’ve played as a two-piece since last summer. This past February, we released our first EP. It’s called Whoever You Are. And in May we’ll be doing our first UK tour.

On your bandcamp page, you describe Dead Buttons’ sound as “rock, blues, rock, country, garage pop, garage rock, garage punk, and proto-punk,” which of these styles do you think most accurately describes the band?

We play music. It’s that simple. To be honest, we don’t like trying to fit our sound into different genres. We like to mix together all the different music we like and try to add our own flavors too.

You recorded your EP in only five hours. Do you think that doing it so quickly helped capture the raw energy?

Yes. We wanted to record things quickly and do only one take of all the songs to try to better capture Dead Buttons’ live energy. We wanted the songs to have a raw, realistic feel to them, not an artificial feel.

How did you decide on the music style?

We tried to find things that both of us liked. Dead Buttons’ current sound is a combination of everything Kang Hee and I enjoy about music.

With Korean bands attending Liverpool Sound City last year, do you think audiences there will have any expectations for your performances?

I don’t think people will have any expectations for our shows because I’m guessing most of the audiences at Liverpool Sound City and the other places we play in the UK will be hearing Dead Buttons for the first time. But we’re confident that when they watch our shows and feel our energy, they’ll enjoy themselves. We’re excited to share our music with new people and to have the opportunity to show them what Korean rock bands can do.

What are your expectations for your gigs after Liverpool Sound City?

We’ve never toured in the UK before, so we’re not sure what to expect. We’ll be playing all our gigs after Liverpool Sound City with Patients. And we’ll also play with Asian Chairshot too on Friday, May 9 in London at AAA. That night will be a full-on showcase of Korean indie music. It should be fun! Hopefully audiences throughout the UK react well to us and we can do another UK tour next year.

Are there more songs ready to be recorded for a new EP or full-length album? Or is the band still fine-tuning its sound?

We plan to release three new singles after our UK tour. We still want to wait a bit longer and experience some more things as a band before recording our full-length debut.

Are there any other Korean bands that Dead Buttons recommends people listen to?

Everyone should definitely check out The Veggers, The Monotones, Galaxy Express, and Billy Carter.

Please keep an eye out for our new singles. They’ll be coming out soon. We hope we can meet some of you in the UK in May! It’s fun getting to meet new people, so please come say hello if you catch us at one of our upcoming UK concerts.