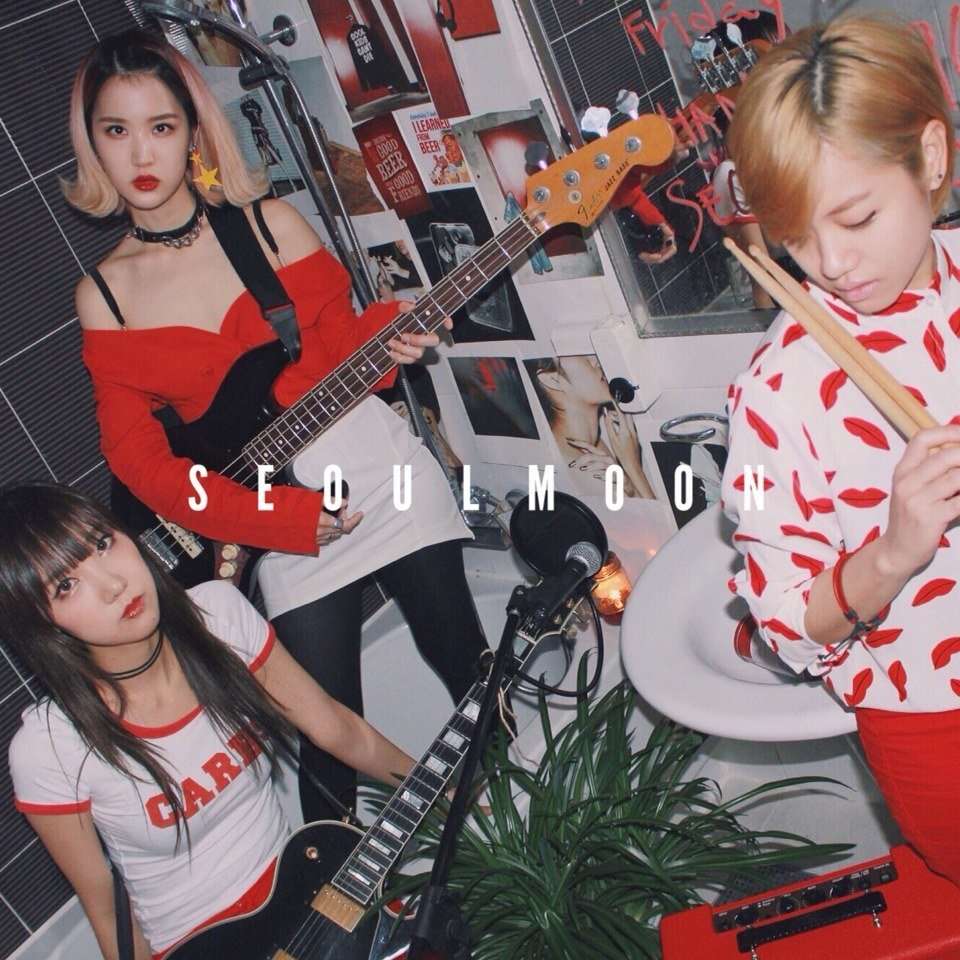 Essentially, I’ve been waiting for Seoulmoon to release a collected EP of their recent singles or a full EP of new songs. They’ve been releasing a new song each month, but since it’s difficult for me to write a review on a single song, I’ve been waiting.

Even if you don’t know Seoulmoon immediately, you would probably know the other bands members are in. Kim HyeMi who is the vocal and guitarist is part of 24Hours. Lu Li is bassist for both Seoulmoon and Bye Bye Badman. Shin HyeMi or Shin (as I usually see it online) is the drummer for Seoulmoon, but she’s the member I don’t know anything about.

As of now, Seoulmoon have four officially released songs. They released “When I First Saw You” back in December 2016. It’s a song that showed a lot of potential for Seoulmoon. The track kind of felt like an experiment taking the strengths of the members to create a song that wouldn’t be too far from what they were used to playing.

The biggest switch was that HyeMi is the vocalist. On “When I First Saw You,” her vocals are good, but do come across a little nervous.

I feel like “Mystery Girls Club” is the song that accurately captured the essence of what the band was going for. Released in January 2017, everything about the song feels more confident. It doesn’t need a fast tempo, it can wander a bit on the verses, and it has a more unique tone.

HyeMi’s vocals feel more confident. Lu Li’s bass provides a better structure and Shin’s drumming supports the song better without needing to fill in every single beat. Adoy might be going for “commercial pop,” but I think they’re going to have to battle Seoulmoon for who has the smoother melodies.

“Always” continues where “Mystery Girls Club” left off. Honestly, it sounds like a part two of the song. It was on “Always” that I really started to wonder when Seoulmoon was going to release something more substantial. Each single has been a step forward and the improvement from song to song has been tremendous.

I’m not discounting the ability of any member, but they definitely sound more comfortable with each other. There’s a more cohesive feeling through their music. On “Always,” the tone and theme of the song feels fresh. I don’t feel like Seoulmoon is trying to convince people outright, but are making a different style of music than each member usually does.

Most recently was “Pineapple.” With this song, it’s clear that Seoulmoon have found their sound. It’s feels like music for the Summer, but everything is releasing in the Winter. I believe that “Pineapple” is the polishing and refining that Seoulmoon is working through. Every piece is fitting where it should and every member has found their role within the band. There’s not too much to say other than it’s a solid track that’s really highlighting the member’s talent.

Four songs in four months is impressive. It might be that Seoulmoon are trying to gain more fans by releasing music more frequently, but it would be nice to get an EP sometime soon. Seoulmoon have a unique musical voice. It highlights the skills of each member, pulling from their experiences, and combining them into something strong.