St.Lenox (a.k.a. Andrew Choi) narrates his stories through his lyrics and the depth of emotions are heard through his vocals. And to be honest, I was a bit intimidated to review his music because of his amazing resume, “graduated from Julliard, studied in Princeton, and pursuing JD in NYU…” I didn’t know how I would feel about myself if I were to find out that he is also a great artist — and lo, and behold, he is a great artist. Serious downer on self-esteem right there. 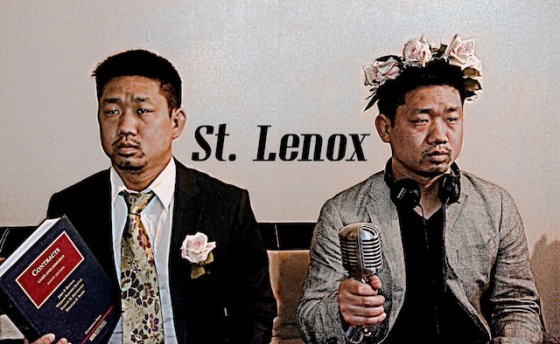 When I first heard St. Lenox, I immediately noticed his singing diction because it was so perfect that even through his thick, husky vocals, I can make out everything that he is singing about without even trying to concentrate on the lyrics. And this might be the cherry-on-top qualities that he has as an artist because his lyrics and his music are so much like excerpts from a very long folktale.

St.Lenox’s songs are, at times, rough, tainted, and disorganized. But that is exactly why I was attracted to St. Lenox. There are so many elements that goes into each song but they all come together in some strange way I cannot explain, it just sounds like they belong. It’s a nice blend of electronica and indie pop with a strong hint of folk. With his songs, you don’t even necessarily have to be into folk to kick back to.
And lastly, St.Lenox hinted that he will be releasing his second album which will be titled, ’10 songs about Memory and Hope’. The album will be available in vinyl for all you record-lovers as well as digitally and on CD.

Missy: Who are you?

St. Lenox: I’m a Korean-American musician, from Iowa, Ohio and now living in Brooklyn, NY.  I’m also currently finishing law school, and studying for the bar exam to get my certification to be a lawyer in New York City.  (Wish me luck!).  I work as a musician on the side, performing in New York City and elsewhere in the United States.

Missy: How would you describe your music?

SL:I guess I would describe it as a mixture of classical music, indie pop, electronica and folk.  I don’t intentionally try to write in any particular style, but a lot of my music has elements of those genres.  It’s interesting because music genre terms in the United States and Korea have somewhat different meanings.

SL: Many years ago, I was a classical concert violinist.  I was trained at Juilliard, and I won national and international awards for the violin when I was young.  So I have been interested in music ever since I was a kid.  I stopped pursuing music for many years though, and didn’t start to explore pop and indie music until much later.  When I was in graduate school for my PhD, I started to go to karaoke bars, and I learned popular music that way.  It was only about a year or so later that I became interested in writing my own music.

SL: To be honest, there aren’t many Korean-American musicians creating indie music.  I’ve heard of a few bands here and there, but it’s been difficult finding other Korean-American indie musicians to talk to in person.  In the United States, Korean parents tend to want their kids to study classical music, or become doctors or lawyers.  Additionally, the American music market is not very diverse – so it is hard to break into the American music market to begin with.

Americans are used to thinking of Korean musicians as either being classical musicians or K-pop – it’s difficult for Americans to think of Koreans as doing indie music in general.  So every time I go out and perform, I am introducing my own music, but I also have to be a representative for Koreans in the indie genre.  I think things have improved since I first started, but it’s always a challenge – and it’s actually really great to see a website like KoreanIndie helping to provide Americans with that exposure.

Missy: How do you compose songs? Do you have any muse?

SL: I compose music electronically with software.  This includes both “pure” electronica, but also a lot of sampling.  I use both traditional sampling, and an advanced form of sampling where I transform the melody of the samples themselves to create my own melodies – essentially creating my own electronic musicians through software.  Aside from that, I try to tell stories with my music – preferably stories that the listener hasn’t heard before, or stories that give the listener a new insight about the world.

Missy:How long did it take you to compose “That Old Time Religion” single?

SL: I think I wrote the lyrics over a few weeks, and composed the main instrumental in a week.  However, it took me some time to polish the instrumental.  My guitarist added some additional live elements to the song to give it extra complexity.  Aside from that, the song incorporates musical references from Elvis, Desree, gospel music, indie and pop.  Regarding composing in general, I’m always working on maybe 10-15 songs at the same time – and I have over 100 songs that I have written, about half of which I plan to eventually release.

SL: I don’t really know.  Maybe, “I Still Dream of the ’90s”.  I took the general song form from a Lou Reed song called “Walk on the Wild Side”.  It is written with piano and several synthesizers that use random sequence generators.  The words are what they call “stream of consciousness” lyrics, about living in the Midwest in the 1990s.  It is told from the point of view of someone from the far future, remembering what the 1990s was like.  I wanted to write a pop song, but have lyrical elements that are more complex than what you get from American indie music.

Missy: What are your plans for the year 2014? Any plans on releasing a new single?

SL: I will be releasing a full album – which contains songs from this single – in September 2014.  The album is called 10 Songs About Memory and Hope, and it will be released on a label in Ohio called Anyway Records.  After that, I will probably finish recording a new album.  The songs that I have planned for the album right now are generally focused on American and international politics, Korea and immigration – though who knows how the album will turn out when it’s done.

Missy: Where can we find you?

SL: I will be performing at a huge music festival in Pennsylvania called Musikfest.  After that, I plan to do some touring, probably visiting Iowa, Chicago, Detroit and NYC, amongst other places.  Hopefully I will be playing a few more festivals – but I have to wait until I’m done studying for the bar exam before I set that up!

Missy: Any last words for our readers?

A lot of the music I’m hearing from Korea sounds young and fresh, so I hope that my Korean brothers and sisters continue to do what they’re doing.  I would like very much to hang out with Korean Indie musicians – so if you know of anyone coming to New York City to visit, have them drop me a line.  At the very least, I can give them a place to crash if they need a place to sleep for a few nights.