After first listening to Psycho last summer, I’ve been hooked on Juck Juck Grunzie like mad. Sure, I was late, but the album’s blend of influences and power made me an instant fan of this group. I was grateful for the chance to interview Juck Juck Grunzie and what follows are their views on expanding the band’s sound into psychedelia, what it really means to be a female-centric band and their summer music festival tour. If you can get to any of their European and Korean stops, make the trip and know one person who is jealous that you will. 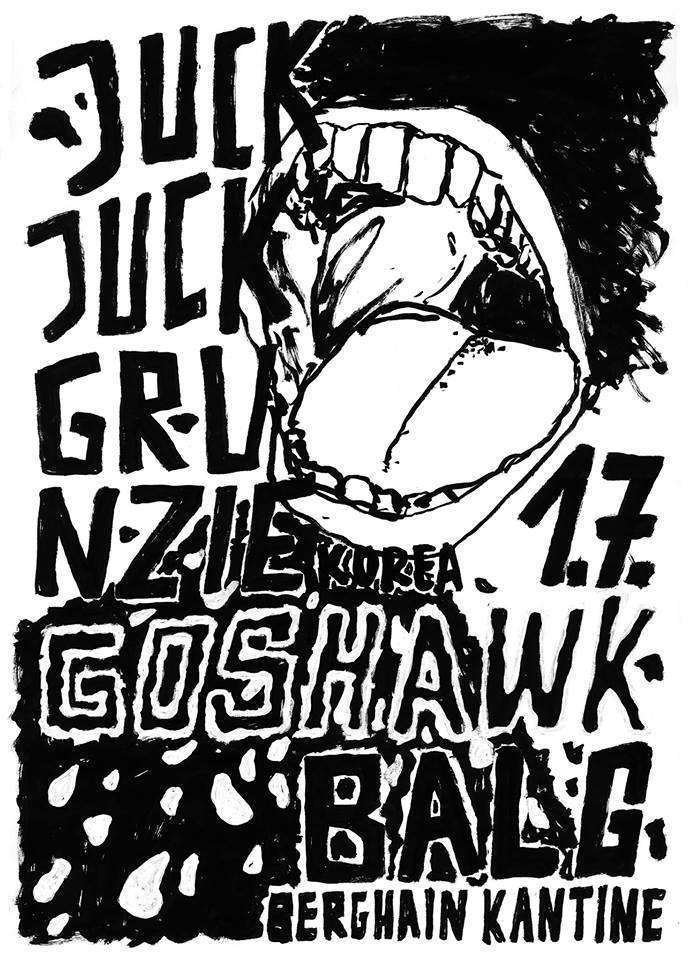 How did you decide to form the band Juck Juck Grunzie? And how did you come up with the name?

Ahreum: Me and Jeehye first formed the band in 2007. We were friends already and wanted to start an all-girl band that put on fun performances. For the first few years, Juck Juck Grunzie’s members were all females, but we’ve had a male drummer since 2012. And our current drummer, Kyunghyun, joined us last December.

Jeehye: Our band’s name is Korean and has to do with being lonely, but it has a bit more of a nuance that’s tough to translate. When the Korean phrase is written in English, we can spell it as Juck Juck Grunzie.

Psycho is your debut LP that came out in 2013. The record is a mix of influences, from psychedelia to guitar rock, noise rock and 70’s era rock. Can you talk about the inspiration behind the album?

Jeehye: I think Psycho was a transitional album for us. Our 2011 Soundchecking EP saw us drawing from post-punk, grunge, and noise rock influences. But with Psycho we were influenced by electronic music and 70’s rock. I think Juck Juck will get more psychedelic as our music progresses. We’re also interested in experimenting with using simpler sounds too.

Some of the writers here at Korean Indie are fans Apollo 18, and I was excited to read that you were going to work with Daeinn Kim, Apollo 18’s bassist, to help produce Psycho. What was it like to work with him on the album?

Jeehye: Daeinn is very good at making musical arrangements. And when we had many contradicting ideas, he was able to organize our thoughts in a clear manner. Also he never forced his ideas on us and always treated us with respect while we were working together.

Let’s talk about “Too Drunk To Fuck,” your cover of the Dead Kennedys track. The song is deliciously moody with an awesome bassline from Hyojung and a much longer take on the short punk original. Why that song to cover and how was the process to record it?

Jeehye: We covered the original punk version of the song in our early days. The original song is so strong and fast, but when I heard Nouvelle Vague’s take on it, it gave me the idea that we should arrange it to fit our own style.

Several of your songs, including “Walking in a Dream” and “Kuruucrew,” feature tempo shifts. I’ve always been curious about why musicians use this technique, so why did you use it?

Jeehye: I think it‘s so hard to play the songs without any rest. So we may have made the songs like that unconsciously! 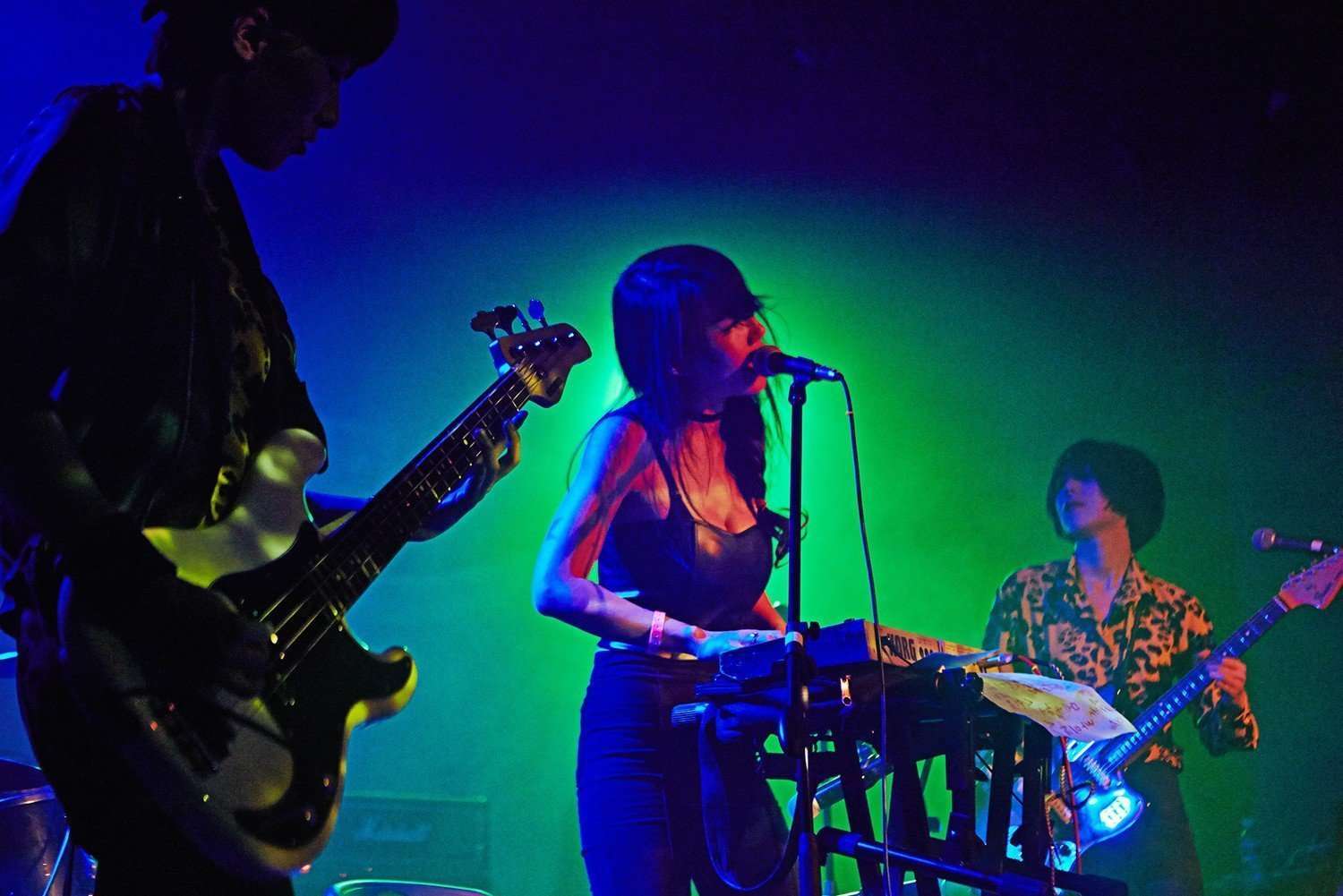 “Ah” is fantastic! I realize that isn’t a question, but I love the vocal work on the song. Though I wish it was longer, can you talk about the creation of this song?

Jeehye: When I first heard that song I felt really good about it. Ahreum actually made the song for the intro to “Dream Like a Dream.” I didn’t know she had the creative ability to create a beautiful harmony like that! I hope she tries to do more things like that in our new songs too.

As much as I love Psycho, it has been close to two years since it was released. When should fans expect new material from Juck Juck Grunzie?

Does the fact that Juck Juck Grunzie is a mostly female band give you an advantage or disadvantage in the Korean indie scene, or is it just a matter of fact at this point?

Jeehye: Actually we get asked questions similar to this a lot. And some people around us often say that it’s an advantage. But we’re not aware of any advantages or disadvantages that come from having three females in our band. This is just our band. It’s who we are.

Are there any events fans should be on the lookout for?

Ahreum: We’re going to be touring in Europe this summer, so fans overseas should definitely be on the lookout for that! We’re going to be doing two shows at Glastonbury Festival this month. We’re super excited about playing at such a prestigious event! And we’ll also be performing in London and doing a pair of concerts in Berlin as well. This tour is going to be a lot of fun.

To help cover the costs of our European tour, we had a fundraising concert in Seoul last weekend that was organized by the Loose Union collective who we often work with in Seoul. They are a DIY label with lots of great bands who work to support each other. And we’re also having a second fundraising concert on Sunday, June 14 at Mudaeruk in Seoul. This one will also include a flea market. The concert will run from 2 pm – 9 pm and will include sets by us, Apollo 18, Dan Pyunsun and the Sailors, Hellivision, Ankle Attack, Vidulgi Ooyoo, Ludistelo, and Victim Mentality. We think it’s going to be a really fun day. We’re so grateful for all the support we’re getting from the community here.

Any parting words for our readers?

Ahreum: Thanks so much for taking the time to read about our band. Your interest and support give us a lot of confidence. We plan to continue our musical growth and development as Juck Juck Grunzie and we hope that you’ll continue to listen to our music, come to our shows, and support us. Thanks again! We wish you a happy and pleasurable life!

Contributed to McRoth’s Residence with a focus on Korean indie and hip-hop music.