Ask a Korean: How to Make it in America with Music

I’d love to hear your opinion on what it would take for a Korean or Korean-American act to “make it” in the US music industry. You could answer that from a macro (shifts in music business corporate strategies, national news outlet coverage) or micro (would the act have to have certain characteristics, would the songs have to be in a certain genre) perspective. I think it is without question there is original, vibrant talent originating or having origins from South Korea. Talent that if all other things were equal, would easily go toe-to-toe with American pop talent and be equally represented.

This is a question that the Korean intended to answer as a final wrap-up for SXSW, until the #CancelColbert hashtag war occupied the attention of everyone on the Internet. Better late than never, so here it is. By the way, did the Korean mention that SXSW was freakin’ awesome, and everyone should go? Just in case people missed it: SXSW is incredible, and everyone should go. It’s absolutely amazing. 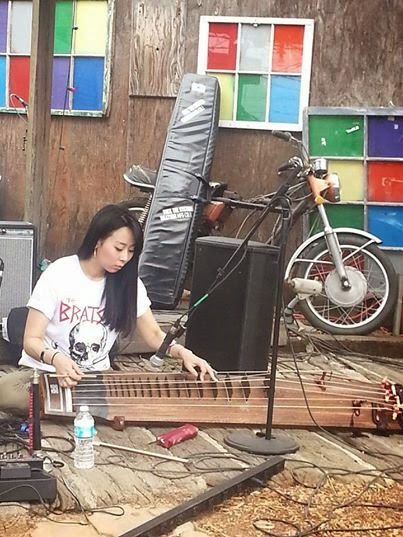 Truth is, TK answered this question in previous posts, albeit somewhat obliquely. (Here and here.) To make the point more directly, the Korean believes that the “mainstream-ization” of Korean pop music in the United States will take place in several stages:

First, there needs to be a dedicated group of Korean pop music fanatics, who would serve as the log-rollers of a larger trend. Every band needs that snotty group of fans that says: “I was into them before they became big.” The Korean jests, but the role of the enthusiastic early adopters is critical. They act as the constantly-burning pilot light, ready to ignite the trend as soon as the atmosphere is correct.

It took a better part of a decade for K-pop to build this infrastructure in the United States. But from his experience at SXSW, the Korean is convinced that this infrastructure is now firmly in place. K-Pop Night Out was one of the most successful showcases at SXSW, and the people came out not just for Jay Park and HyunA, but for Crying Nut and Idiotape. Seoulsonic showcase had so many non-Koreans speaking fluent Korean, chatting excitedly about Glen Check. The only other place where I saw that many non-Koreans speaking fluent Korean was at a high-brow diplomatic function Washington D.C. Even in San Antonio, a smaller city that one would not readily associate with Korean pop music fandom, drew a solid crowd for a Sunday night show. Separately from SXSW, Dynamic Duo’s recent showcase at the Kennedy Center drew at least 500 spectators, half of whom were not Korean but screaming as loudly as any other. The early adopters are already here.

Second, there needs to be a baseline of respect for Korean pop music among the movers and shakers of America’s music industry. This, in fact, was a crucial component for Gangnam Style’s success. Many consider Gangnam Style to have come out of nowhere, like a strike of lightning out of a clear blue sky. Not so. This graph is worth revisiting:

This graph, from a study that YG Entertainment commissioned, shows the interplay between the log rollers and the power brokers of American pop music. Numerous log rollers, chief among them Allkpop, promoted Gangnam Style’s music video through its Twitter. Rapper T-Pain had enough baseline respect for Korean pop music to pay attention when enough log rollers became excited about Gangnam Style. T-Pain took the time to look at PSY’s music video, and promoted to other industry insiders. The rest, as they say, is history.

In the Korean’s estimation, this stage is partially constructed for Korean pop music. Korea’s idol groups are the farthest along. Lady Gaga’s recent pick of Crayon Pop to open her shows this summer is but one piece of evidence. Among the powers that be of American pop music, Korean idol groups are taken seriously.

Korean rock and hip hop acts are trailing behind. Korean rock suffers from fighting in a crowded field; as delightful as listening to, say, Deli Spice is, there is simply no shortage of U2-inspired modern rock bands in the U.S. market. Even so, certain Korean rock bands manage to find an angle that is not sufficiently explored in the U.S. rock scene–for example, Jambinai with Korean traditional instruments or Glen Check’s sophisticated synth-rock. Hip hop will probably have the toughest time, as the audience for hip hop tends to care a great deal about (perceived) authenticity. Unfortunately, to many U.S. hip hop fans, an Asian face does not scream “THUG LIFE.”

Third, the interplay between the first and the second stages results in a sizable corps of fan base. This group would be much, much larger than the log rollers in the first stage. Their interest in Korean pop music would not be as rabid as the log rollers’, but they care enough to continuously purchase albums and attend concerts once in a while, to the extent Korean acts tour in the United States. Ideally, this group will be large enough for Korean bands to continue directing at least some effort toward the U.S., in the form of making their music available in the U.S. (via, for example, YouTube and iTunes) and putting on regular tours. Likewise ideally, this group will be large enough that, when an American person says “I listen to Korean pop music,” it would be received as if she said “I like listening to classical music” rather than “I listen to radio static to find signs of life from outer space.”

Then there is the fourth and final stage: a viral, mainstream-ized hit a la Gangnam Style, seemingly appearing out of nowhere as if by magic. But of course, nothing cultural comes out of nowhere–each viral hit is a sudden unleashing of pent-up cultural accumulation. As the base of K-pop appreciation becomes wider and deeper, the interval between new viral hits will become shorter and shorter.

Got a question or a comment for the Korean? Email away at askakorean@gmail.com.

Re-posted with permission from T.K.