Another band heading to the UK for Liverpool Sound City is Asian Chairshot. I found their EP Mask really interesting and different from other music I’d heard last year. I also had a chance to interview them in the middle of last year after they returned from playing in Singapore. The mixture of psychedelic and rock creates some very interesting soundscapes that are a bit unusual at first. But just listen to Mask and you’ll be hooked.

I’ve been waiting to hear the release date of their full-length and, bassist/vocalist, Youngwon Hwang revealed the title and release date below. They worked with some famous names on the production of the album so I’m really interested to hear the final product.

If you want to see the band on their UK tour here are the dates: 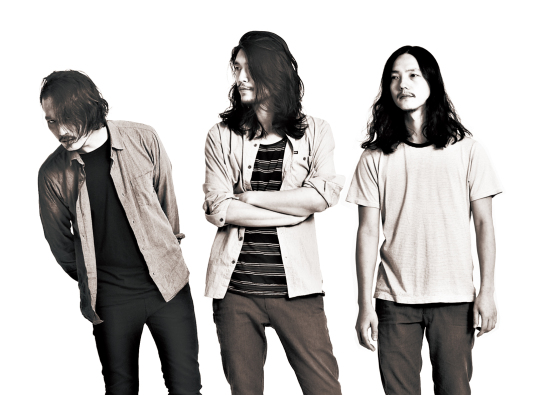 Can you introduce the band?

We’re Asian Chairshot from Seoul, Korea. We’re a rock ‘n’ roll trio comprised of guitar, bass, and drums. I play bass, Heenam plays guitar, and Kyewan plays drums. Historically, there have been a lot of great rock acts that were three pieces like Motorhead, Cream, and Venom. Hopefully this means we’re going to be great too!

How would you describe the style of music you play? It sounds like a mix of rock and some psychedelic elements.

Asian Chairshot have played festivals in South Korea and Singapore, and now you’re heading to the UK. Any thoughts or expectations on this upcoming tour?

We’re excited about touring in the UK because it is the birthplace of rock ‘n’ roll. This will be our first time touring there. We know that we’re going to have keep touring there in the future in order to make a name for ourselves. Hopefully people like our music this time around and we can return soon for more dates in the UK and other European countries.

Are you more exited to play Liverpool Sound City or the tour after? Is it more comfortable to play in smaller clubs as opposed to festivals?

All of the shows on our UK tour will be in small clubs, even the gigs as part of Liverpool Sound City. We’re looking forward to the whole tour and are excited to play on all the stages regardless of their size. Performances are always thrilling to us. It’s going to be really cool to meet new bands and new music fans in all the places we’ll visit on our tour. I think this tour will be a really good learning experience for us.

Is there an expected release date for your full-length?

The album will be out on May 28 and is titled Horizon. We released the first single from the album a few days ago. People can check it out.

We recorded Horizon last December in Seoul. The album was produced by Jeff Schroeder from Smashing Pumpkins and engineered by Ryan Grostefon, who worked with Smashing Pumpkins on their 2012 album, Oceania. We had such an awesome experience working with those guys, and we’re excited for everyone to get to hear the new music that they helped us to create.

How does the band compose songs? Do songs come together from experimenting with riffs and then expanding on them?

Usually I make the melodies and the lyrics using an acoustic guitar. Then we complete the rest of the songs by jamming together.

Korean independent music is gaining popularity internationally with more bands touring outside of South Korea. Do you see this trend as being positive for bands or do you think it doesn’t have much effect in the short term?

It’s obviously a positive thing. Bands being able to expose a wider audience to their music is always a good thing. The effect on the local music scene has just been small so far, but I think that will change as time goes on. I think we’re going to see some Korean bands becoming much bigger acts globally in the future.

What’s the biggest struggle the band has had since starting?

Our struggles so far have mostly been financial. Like many indie musicians around the world, it’s really difficult to make enough money to live just off of playing music.

How did it feel to get nominated for the Korean Music Awards 2014? Do you have any goals for 2014?

We felt very honored to be nominated for “Best Rock Album” and “Best Rock Song” at the 2014 Korean Music Awards. It would be wonderful if we can win an award at next year’s ceremony for our upcoming Horizon album. As for this year, we’re hoping to play as many gigs abroad as we can. In March, we played in Singapore at the Mosaic Music Festival. Next week we’ll start a two-week UK tour, and then we’ll be playing in Singapore again at the end of May. We’d like to travel to more places to share our music if we can as well.

Are there any Korean bands that Asian Chairshot recommends?

All music fans should be familiar with Shin Joong Hyun, Sanullim, and Deulgukhwa.

Do you have anything to say to readers?

Thanks for reading about Asian Chairshot. We hope to see you soon in the UK, or maybe in another part of the world. Beware of our musical chair shot! It’s got the power to knock you out!